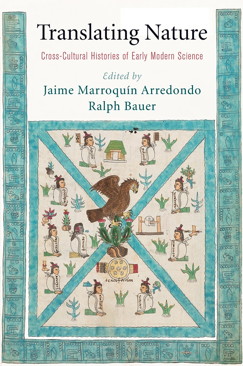 Today, we have a guest post from Jaime Marroquín Arredondo, Associate Professor of Spanish at Western Oregon University and co-editor with Ralph Bauer of Translating Nature: Cross-Cultural Histories of Early Modern Science, new from Penn Press. Marroquín Arredondo and Bauer's book recasts the era of early modern science as an age not of discovery but of translation. As Iberian and Protestant empires expanded across the Americas, colonial travelers encountered, translated, and reinterpreted Amerindian traditions of knowledge—knowledge that was later translated by the British, reading from Spanish and Portuguese texts. Translations of natural and ethnographic knowledge therefore took place across multiple boundaries—linguistic, cultural, and geographical—and produced, through their transmissions, the discoveries that characterize the early modern era. In today's post, Marroquín Arredondo explains in greater detail this approach to understanding translations' constitutive role in defining scientific knowledge in the early modern era.

The historical study of the first global networks of knowledge during the post-Columbine European expansion over the globe has understood them as an almost exclusive work of European agents. These agents were both the travelers in charge of gathering new knowledge in a world being colonized as well as creators of the emerging institutions of scientific knowledge. The role of indigenous informants all over the world in these narratives, when acknowledged, is often reduced to that of victims: forced mediators between the objects of nature and their study by European men of science. Translating Nature: Cross-Cultural Histories of Early Modern Science is a welcome volume for the study of the transatlantic and even global beginnings of modern science. It unveils the complex and multiple agencies that indigenous knowledge from all over the world, including Europe, had in the shaping and formation of modern scientific institutions and the rise of a new, scientific discourse. Indeed, the gathering of almost all information about the New World—its geography, botany, medicine and ethnography—was vastly dependent on the capacity of Iberian men of letters, doctors, administrators and merchants to establish a productive dialogue with American Indians. Indigenous knowledge was at the center of the massive exchange of knowledge between the New and the Old World during the early modern period. Amerindian knowledge was thus fundamental for the epistemological changes that we commonly name as a Scientific Revolution. It was a knowledge, however, mostly hidden in translation.

This emphasis in the role of translation for the gradual emergence of modern scientific institutions, methodologies, and discourses not only unveils the role played by Indian knowledge. It also strongly reinforces the need to include the scientific history of the Iberian colonial empires in the Americas and Asia, as this provided several foundational models for different scientific practices and for the establishment of the first global networks of knowledge. As my co-editor and I state in our introduction, the conceptual incorporation of early Americas’ massive natural world into the Old World’s natural philosophy (science), together with the empirical verification and update of classical knowledge through natural history, outlines the beginnings of modern natural science. These beginnings should be understood, then, as the development of multiple networks of knowledge translation, including both the Iberian translation of American indigenous knowledge as well as Northern Europe’s translation of Iberian knowledge during the seventeenth and eighteenth centuries. History, with its different subfields, was the main textual genre for the writing and dissemination of the first global network of knowledge translation that accompanied the rise of modern science.

The contributions that conform Translating Nature provide key case studies about these extraordinary translations that profoundly changed most cultures over the globe. They include different case studies about the written and unwritten knowledge of indigenous informants to European scientific agents, attending to a complex corpus of knowledge that permeates the whole era of European geographical discoveries. They also analyze different instances of the circulation and constant re-translations of knowledge in different geopolitical spaces, according to the needs and resources of the participating cultures, nations and individuals.

The importance of these cross-cultural translations of nature is perhaps most evident if we agree with Bruno Latour’s famous consideration of the word modern as a designation of the mostly hidden heterogeneous networks of knowledge that permitted the conceptual separation of the natural world, human society, and the discourse of science. The historical study of the processes of translation that mediate between natural phenomena, social practices of knowledge, and scientific discourse reveals how the artificial separation of nature, society and scientific discourse were carried out. Mostly absent from Latour’s work, however, was the explicit linking of the study of the formation of the first global networks of scientific knowledge with the European translation of indigenous knowledges and their subsequent translations and reformulations in an incipiently global world. Translating Nature begins to make out such a link.