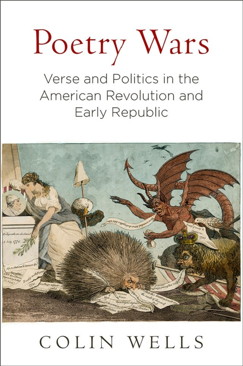 Today, we have a guest post from Colin Wells, Professor of English at St. Olaf College and author of Poetry Wars: Verse and Politics in the American Revolution and Early Republic. Wells's book examines the poets and balladeers who, during America's founding period, engaged in a series of literary "wars" against political leaders, journalists, and each other, all in the name of determining the political course of the new nation. He argues that political verse from this period was a unique literary form that derived its cultural importance from its capacity to respond to, and contest the meaning of, other printed texts—from official documents and political speeches to newspaper articles and rival political poems. Here, he looks at his research and analysis through the lens of Hamilton and its use of hip-hop to represent the political debates of post-Revolutionary America.

There are many things to love about Lin-Manuel Miranda's musical Hamilton, from its emphasis on Hamilton's immigrant story to his deadly rivalry with Aaron Burr. But what is perhaps most "revolutionary" about Hamilton for contemporary audiences is its form—as a hip-hop musical. As Jeremy McCarter puts it, Miranda is a unique playwright because he "us[ed] hip-hop to tell a story that had nothing to do with hip-hop—using it as form, not content.”

What does it mean to use hip-hop to retell the story of America's founding? Part of it has to do with the fact that, as a contemporary African-American art form, rap infuses this history with a consciousness about race that has often been repressed. But part of it has to do with the simple fact that to tell Hamilton's story through rap is to tell it through poetry. Like all poetry, rap condenses content into clever spurts of sonic, rhythmic, and linguistic playfulness. We see this, for instance, in the song "Cabinet Battle #1," which recasts the political debate over Hamilton's funding scheme as a rap battle in which Jefferson and Hamilton vie for a literary triumph that both hope will also shape the policy decisions of the audience of their battle, President Washington. Thus, when Jefferson contrasts Hamilton's financial plan with his own preferred ideal of an economy of small farmers—

Our debts are paid, I'm afraid.
Don't tax the South cuz we got it made in the shade.
In Virginia, we plant seeds in the ground.
We create. You just wanna move our money around

—Hamilton retorts by pulling the mask off Jefferson's agrarian republic to reveal the ugly truth:

A civics lesson from a slaver. Hey neighbor.
Your debts are paid cuz you don't pay for labor.
"We plant seeds in the South. We create." Yeah, keep ranting.
We know who's really doing the planting.

This battle works well as rhetoric because it works well as poetry: Miranda's characters use various modes of sound repetition, syncopated rhythm that works with and against the beat of the song, and clever wordplay. Rendering the debate in the form of a poetic performance reminds listeners that political struggle itself contains important performative elements, such that gaining the upper hand in a battle of words and wit can appear as a crucial step toward influencing public discourse and, by extension, political policy.

Yet remarkably, the infusion of hip-hop poetry that makes Hamilton seem novel is actually an updated version of a very old cultural practice. In fact, examining the literature of the America's founding period reveals that it was more like Miranda's musical than most people realize. No, Jefferson and Hamilton didn't rap against each other, but dozens of public poets battled against each other throughout the 1790s in poems that drew on similar themes and techniques. It is this story that I recount in Poetry Wars: Verse and Politics in the American Revolution and Early Republic. Beginning in the years just prior to the Revolution and ending with the conclusion of the first party system in 1815, poets engaged in literary "wars" against political leaders, journalists, and each other, all in the name of shaping the course of the new nation. In contrast to the way we usually view poetry today, eighteenth-century poets saw their work as weapons for resisting imperial authority, undermining the directives of military and political leaders, and satirizing one's political opposition as a dangerous faction threatening America from within.

To be sure, the battles fought among rival poets weren't as immediate as rap battles. Rather, they played out in the pages of pamphlets, broadsides, and partisan newspapers, whose numbers increased exponentially in the Revolutionary era. Yet despite this difference, many of the literary wars described in Poetry Wars played out in a way that anticipates the dynamic of the cabinet battles portrayed in Hamilton. Jefferson's attack against Hamilton's funding scheme as a boon to corrupt speculators was a common motif among poets who wrote on behalf of Jefferson's emerging Democratic-Republican opposition. One fellow Virginia poet addressed Hamilton and his fellow Federalists in similarly sarcastic tones as Miranda's fictional Jefferson, facetiously promising not to reveal all the skimming and speculating being perpetrated by Hamilton's Federalist allies:

I'll swear to all the world—you never dipp'd
In Speculator's kennel your poor hands;
That not a soul of you e'er dealt in script;
To prove my words your broker ready stands.

For their own part, Federalist poets anticipated the fictional Hamilton's withering attack against a slave economy that propped up Jefferson's agrarian ideal. One New England poet pointed out that while Jefferson spoke plaintively about the rights of impoverished peasants during the French Revolution, the "sable sans-cullottes" from Jefferson's home state of Virginia "no mercy find" from their so-called republican leaders. Another took Jefferson to task for his notorious discourse on racial difference in Notes on the State of Virginia, arguing that Jefferson's plan to abolish slavery and recolonize freed slaves to Africa is part and parcel of his racist belief that "negro slaves" are:

Of a race beneath the whites—
So far beneath, he thinks it good
To exile all their brotherhood.
Lest blood be stain'd in love's embraces,
And beauty fade from Southern faces.

Another similarity between the poetry wars of the 1790s and contemporary rap battles is the prevalence of the tactic of citing or referencing the exact words of one's antagonist and circumscribing them within a new narrative intended to negate their ideological power. In Hamilton, the fictional Alexander Hamilton quotes Jefferson's smug description of the Virginia economy—"we plant seeds," "we create"—only to unmask this language as a sham justification for a system in which everyone knows "who's really doing the planting." As I point out throughout Poetry Wars, this same tendency to cite, quote, and parody the language of political leaders is one of the primary features of eighteenth-century American political verse. One of the signature poetic strategies of the Revolutionary era, in fact, was to take the language of an official document such as a royal proclamation or a declaration by the Continental Congress and parody and recreate it in the form of burlesque verse. This tactic of reminding the public of the precise words political leaders wrote or spoke would become not only a common feature of political poetry in the founding period, but also a common strategy for holding politicians accountable even in our own time.

In a his book on the poetics of hip-hop, Adam Bradley argues that rap is a form of public poetry, and that its emergence at the end of the twentieth century filled the yawning cultural gap created when modern poetry became increasingly abstract, complex, and inaccessible to popular audiences. Yet centuries before this shift took place, public poetry was alive and well in America, and like much contemporary hip-hop, was a crucial means of speaking back against the powerful, unmasking the motives of those who sought to wield power, and preventing one's political enemies from controlling the narratives on which law and policy were often based.