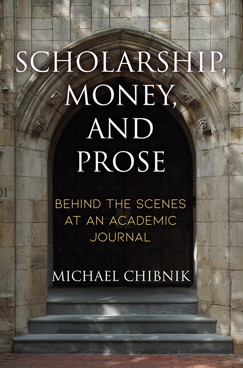 Today, we have a guest post from Michael Chibnik, Professor Emeritus of Anthropology at the University of Iowa and author of Scholarship, Money, and Prose: Behind the Scenes at an Academic Journal, new from Penn Press. In Scholarship, Money, and Prose, Chibnik offers a candid account of the complex and challenging work entailed in the production of the journal American Anthropologist from his vantage as its editor-in-chief for four years—and in today's post, he summarizes his thoughts and insights on the work of editing a major academic journal

There are a lot of academic journals. Although estimates of the number vary, a recent study gave a figure of about 70,000. Some journals, such as Political Science Review and Ecology, provide broad coverage of particular disciplines; others, such as Minnesota History and New Nietzsche Studies, are more specialized. Scholars depend on these publications to learn about recent developments in their areas of interest, and academics can advance their careers by publishing articles in reputable journals.

From 2012 to 2016, I was the editor-in-chief of American Anthropologist (AA), one of the most influential anthropology journals in the world. AA, founded in 1888, is the flagship publication of the American Anthropological Association. Editing AA was a complicated job that involved working with a large editorial board, six associate editors, a managing editor in California, an editorial assistant at my university in Iowa, and staff at the American Anthropological Association and our publisher, Wiley-Blackwell. Articles and essays in the journal examine an astonishing variety of topics. Issues include research articles, research reports, book reviews, obituaries, interviews, commentaries, forums, distinguished lectures, and sections on public anthropology, visual anthropology, and world anthropology.

One of my topical specialties is the anthropology of work. My colleagues in this field have carried out detailed ethnographic studies of farmers, hedge fund traders, truck drivers, geishas, and drug dealers. While I was learning about the complexities of editing AA, I wondered why they had not also examined the work of academic editors. The activities of editors, after all, directly affect the careers of scholars writing ethnographies of work. I could not even find a breezy, gossipy memoir about academic publishing similar to those written by editors at popular magazines and commercial presses.

Scholarship, Money, and Prose aims at making editorial work more visible by providing both an ethnographic and historical account of a major journal and a behind-the-scenes look at my own experiences. Editors of journals such as AA are gatekeepers, deciding what kinds of articles will be made readily available for large numbers of readers. I knew when taking the position as AA editor that much of my work would involve making decisions about which submissions to accept and which ones to reject. As is the practice in many academic journals, most manuscripts submitted for consideration as research articles at AA are sent to peer reviewers for comments. One of my main concerns was whether I would have problems getting good reviews. I had heard that editors often had trouble finding people willing to comment on manuscripts. The academic folklore was also full of stories of reviewers misunderstanding manuscripts and providing destructive, nasty comments. However, I was pleased to discover that my worries were unfounded: my editorial assistants—with the aid of AA’s editorial board—had little trouble quickly finding reviewers. Most reviews were constructive and helpful.

My book includes chapters about the complex review process at AA and the extent to which the comments I received about manuscripts influenced my decisions about whether or not to accept papers submitted to the journal. This would not surprise most people reading a book about editing. Much of the book, however, is about three issues related to editing academic journals that many scholars are only vaguely aware of. First, editors have to pay careful attention to keeping costs down and revenues up. Financial management has become an especially important aspect of editing in the current economic environment for academic publishing. Second, editors must cope with pressures to include content that strikes a balance among different theoretical perspectives and topical specialties. Such pressures are particularly salient in anthropology, a diverse field in which practitioners differ greatly in the degree to which they take scientific or humanistic approaches. Finally, perhaps more so than many other editors, I tried hard to make AA as readable as possible. I am not alone in observing that academic prose often includes opaque jargon and convoluted sentences.

When I discussed with other anthropologists the possibility of applying for the position as AA editor, the most common reaction was wonderment that anyone would want the job. Most regarded the position as a time-consuming, thankless slog likely to involve arguments with disgruntled authors whose manuscripts were rejected. Such conflicts turned out to be rare. To my surprise, some authors of rejected manuscripts thanked me for our prompt consideration of their papers and suggestions for possible revisions if they wanted to submit their papers to other journals. Although my interactions with authors were almost always pleasant, I found that editing the journal did involve me in some conflicts. I have space here to only briefly mention three controversies that are discussed in detail in the book.

Increasing costs and the development of the internet have spurred a movement towards open access journals in which readers everywhere can see online the content of publications. Advocates of open access oppose the placement of journal articles behind a paywall in which content is available without cost only to individuals affiliated with institutions that have subscriptions. In a from-the-editor column, I presented reasons why open access was not likely to be feasible in the near future for AA. This widely read column was harshly criticized by impassioned supporters of open access.

Although I encouraged articles in AA related to contemporary world problems, I—perhaps naively—hoped to avoid polemical political arguments. My hopes in this respect were dashed when our world anthropology section in one issue included interviews with nine former presidents of the Israel Anthropology Society. These interviews were part of a series of articles about anthropology in different countries around the world. Some of interviewees indicated their unhappiness with a resolution that the American Anthropological Association was considering to boycott Israeli academic institutions because of their government’s actions concerning Palestinians living both within and outside the disputed borders of the country. Supporters of the resolution (which was ultimately narrowly defeated) complained that AA was trying to influence the vote.

Despite these occasional controversies, I greatly enjoyed editing AA. The work was always interesting, and I liked learning about what was going on in anthropology, I sometimes wondered about the extent to which my experiences were similar to those of editors of other academic journals. I hope to see other book-length accounts of editing in the years to come.