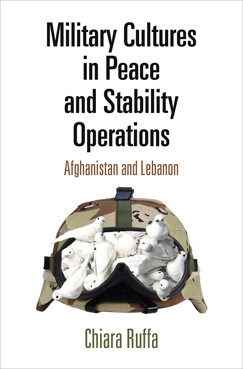 Today, we have a guest post from Chiara Ruffa, Senior Lecturer in the Department of Security, Strategy, and Leadership at the Swedish Defense University in Stockholm and author of the new book Military Cultures in Peace and Stability Operations: Afghanistan and Lebanon. Ruffa's book challenges the widely held assumption that military contingents, regardless of their origins, implement mandates in a similar manner. She argues instead that military culture—the set of attitudes, values, and beliefs instilled into an army and transmitted across generations of those in uniform —influences how soldiers behave at the tactical level. Between 2007 and 2014, Ruffa was embedded in French and Italian units deployed under comparable circumstances in two different kinds of peace and stability operations: the United Nations Interim Force in Lebanon and the NATO mission in Afghanistan. In today's post, she reflects upon this experience and seeks to explain both how fieldwork is done under difficult conditions and why it remains important to study hard-to-access groups like the military.

When I first started studying the military, I knew close to nothing about it. While working for the UN in the Central African Republic, I started to wonder what the military had to do with peacekeeping and soon realized that they played an important role at helping to solve conflicts. I have researched troops deployed in peace and stability operations since 2007, and I collected the vast majority of the empirical material for my book through extensive fieldwork in conflict zones, for nine months in total, as well as several follow-up interviews. I conducted more than 300 interviews with French, Italian, Korean, Indian and Ghanaian military officers, NCOs and enlisted, as well as with military personnel in UN and NATO Headquarters in Lebanon and Afghanistan. I also observed for weeks soldiers’ behavior while patrolling, distributing humanitarian aid, doing reconstruction work, and teaching yoga or tae-kwondo. While in the base in Naqoura, Tyre, Rmeish, Kabul, Herat, I listened to them planning and making sense of what was going on in their respective Area of Responsibility. On their way to the theatre of operation, as they call it, I witnessed their fear of dying and their sense of duty. But in order to understand conflict dynamics more broadly, I also collected extensive material interviewing NGO personnel, ICRC and UN staff, and conflict parties such as Hezbollah, and I spent as much time outside military bases wondering around and asking questions to experts and ordinary people.

Despite the increasing appeal and traction of methods that allow to study political phenomena far away from where they are happening, “fieldwork is as important as ever.” For reasons that are partly due to normative and disciplinary divides, however, the study of military organizations remains the domain of military academies and of a relatively small number of “ordinary” academics. Doing field work on state military organizations in conflict situations is difficult because one needs to gain access to the military, the most traditionally secretive and closed state bureaucracy; because one is in a conflict zone, with huge implications for one´s own safety and the safety of those surrounding the researcher and related huge ethical challenges. Here, I share some insights on how I did it and the challenges I struggled with.

In order to study military deployed in operations, it was not enough to show up at the gate of a military base in a peacekeeping mission. I had to be authorized to talk to military personnel by the Joint Chiefs of Staff of the military I had selected for my study. In order to gain access, one has to build trust. And it takes a long time—and persistence—to build up trust. This is no easy task, particularly for someone, like me, who has no previous knowledge or connection to the military. It took me years to have access to some of the militaries and at times rocambolesque experiences. For instance, when trying to get in touch with the Italian military, traditionally reluctant to be studied, I called them every day for six months to persuade them and reassure them that my research was important and interesting, and that I would be careful at handling the data I would collect. In general, the main fears of state military organizations are criticism against the organization itself and possible misuse of potentially sensitive information about both personnel and the operation. Because of this, it helps to be transparent and honest but also, if needed, to diversify the potential access points. In my case, I first tried to get authorized at the NATO level, then at the Joint Chief of Staff level within the French and Italian military. My efforts eventually paid off: in the fall of 2008, I found myself on a C-130 bound to Kabul where I could start collecting material for this research.

It takes time to decipher the military and learn how navigate through the organization. It is important to learn the jargon and get used to the key tenets of specific service and unit cultures in order to better formulate questions and to gain respect and authority. For instance, military personnel tend to appreciate outsiders who know differences among services and specialties. Also, one should not under-estimate the benefit of being able to address one´s interlocutor with her or his correct rank title. While this might be particularly challenging when doing comparative work across state military organizations, the standardized NATO ranking system helps to decipher and compare across rank systems. It is also very important to be alert to the symbolic and ideational side of military functioning: I regularly attend parades, take notes when attending flag rituals, have a collection of the calendars produced by each unit—and of random items that were given to me on my official visits, such as NATO teddy bears or unit-specific stove-top percolators. This long-term investment into capturing the sociology of the military has allowed me to learn more about the internal functioning of the military. Even though it might be harder to gain access without previous experience, it helps to explore the organization afresh often noticing small things of great importance.

Once access is gained, a crucial next step is to cultivate and maintain trust between the researcher and her interviewees. It took me a long time to establish a first contact and get authorized, but once I got my foot in the door, it became a lot easier to conduct follow-up interviews and get access to other organizations. For instance, I am currently running surveys with the Swedish armed forces, taking part as a participant observer in international military cooperation sessions, doing focus groups with navy officers. I have achieved that by preserving anonymity for every interviewee, while trying to be as detailed as possible to strive for higher standards of transparency in qualitative research.

At the same time, building trust has never meant to me that boundaries should become blurred. Unlike in many ethnographic studies, when the researcher after many months of observation ends up becoming like one of the people under study, I do not think I ever wanted to become one of them, nor I would have ever managed to. In a way, my difference has been in many ways a strength—that female researcher in a red coat walking around the French military base in Afghanistan was definitely a curious addition to the landscape, and maybe allowed some of the soldiers to have someone to voice their frustrations to. While it has been difficult to handle certain situations, such as when important humanitarian principles were put in danger, I have always strived to show my professional side, albeit without shying away from expressing criticism for certain things.

But the issue of boundaries can have other important ramifications. One should never forget that being perceived as too close to the military can have dire consequences in spaces where the military intervention is unpopular or not accepted. Therefore, I developed strategies to make sure that people assisting me in my research would not be put in danger in any way. For instance, in Southern Lebanon, my taxi-driver Khalil would not wait for me outside any military base of the UN mission in Lebanon. Even more importantly, in Afghanistan, the NGO that hosted me never used its car to accompany me to the NATO bases.

Notwithstanding the limitations discussed, state military organizations constitute a rich and under-explored social terrain that deserves to be studied more comparatively, beyond the one country-one case focus and beyond the domain of military academies. This realm of study promises to reveal key information and ideas about conflict dynamics and the ability of soldiers to keep peace and protect civilians. While studying military organizations during deployment is a challenge, it is certainly possible, and remains an important undertaking warranting further scholarly attention.