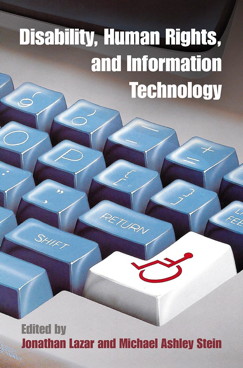 Today we have a guest post from Jonathan Lazar and Michael Ashley Stein, co-editors of Disability, Human Rights, and Information Technology. Lazar is Professor of Computer and Information Sciences at Towson University and Stein is Cofounder and Executive Director of the Harvard Law School Project on Disability. Together, they've assembled a host of esteemed contributors seeking to address the global issue of equal access to information and communications technology (ICT) by persons with disabilities. Here, they lay out the case for the right of individuals with disabilities to access digital content, and explore failures within the government and corporate sector to accommodate this right.

People with disabilities have a civil and human right to access the same digital content, at the same time, and at the same cost as people without disabilities. In a majority of cases, technology solutions already exist to make that situation a reality. Yet, despite the ready availability and minimal cost of technology to enable people with disabilities to equally access ICT—as well as the increasing use of that technology by consumers without disabilities—prevailing practice around the globe results in the exclusion of those individuals. This is true both for the public sphere where open access to government is one measure of transparency and legitimacy, and also for the private sector which has a vested economic self-interest in engaging the largest possible number of consumers.

The arbitrary and irrational nature of these circumstances is frustrating and perplexing. When incorporated into the initial design and manufacture of information and communication technology (ICT), digital content can be made accessible to persons with disabilities at little or no added cost. To illustrate, when web content is designed from the start to be accessible the expected costs are only 1-2% of the overall web design project. This is similar to architectural design. When accessibility features are included into architectural design, the costs are minimal. But when accessibility features are not included, the costs are much higher to retrofit. And companies often claim that the costs are prohibitive to make adjustments to a building, when in fact, it was their unwillingness to include accessibility considerations in initial design, which in fact is what caused the expense.

Strikingly, some companies go beyond neglecting their legal and social obligations to include consumers with disabilities, and actively resist making their hardware, software, and websites accessible. Amazon provides a case study in recalcitrance. From the time that the Kindle e-book device was first introduced in 2007, there have been multiple problems related to accessibility through various iterations of the device despite repeated efforts by disability rights advocates to educate Amazon about these barriers. Subsequently, and in response to Amazon’s continued and conscious exclusion of users with disabilities, the disability rights community convinced U.S. federal government officials to cancel millions of dollars of contracts for Kindle devices as being in violation of federal law prohibiting disability discrimination. In March 2016, Amazon signed an agreement with the National Federation of the Blind to make their products more accessible.

Why do government agencies and departments violate their legal and fiduciary duties by resisting making otherwise publically available information accessible and available to members of the public with disabilities? Why do otherwise rational income-maximizing companies break laws and work against their own self-interest by refusing to make their websites accessible to consumers with disabilities? Such actions are admittedly flummoxing.

New technologies create interesting questions at the intersection of human-computer interaction, disability rights, civil rights, human rights, international development, and public policy. Indeed, more frontiers of human-computer interaction are unsettled than resolved, and this is especially true when involving persons with diverse disabilities. Some quandaries arise in the circumstance where technologies have advanced ahead of existing laws and policies, as is the case when considering the intellectual property implications of captioning (captioning is an accessible solution that has existed for nearly 40 years). Other complexities arise where legal norms have been established but not yet implemented, or where legal rights are defined but clear technical implementations are not yet established, for instance interface accessibility for people with cognitive impairments. Additional questions arise when allocating limited resources, especially within the context of developing countries.

Disability, Human Rights, and Information Technology addresses the globally pertinent issue of equal access to and inclusion in ICT by persons with disabilities. Within the U.S., as touched on above, the right to equal access is expressed in terms of antidiscrimination prohibitions under both the Rehabilitation Act and the Americans with Disabilities Act. More globally, this right is implicit in several human rights instruments, features prominently in Articles 9 and 21 of the Convention on the rights of Persons with Disabilities (CRPD), and is the subject of the Marrakesh Treaty to Facilitate Access to Published Works for Persons Who Are Blind, Visually Impaired or Otherwise Print Disabled (Marrakesh Treaty). The right to access ICT, moreover, invokes cross-cutting civil and human rights issues, among them freedom of expression, freedom to information, political participation, civic engagement, inclusive education, the right to access the highest level of scientific and technological information, and participation in social and cultural opportunities. This book is truly at the intersection of a number of different topics, most broadly, human-computer interaction and disabilities rights law. The authors of each chapter are a healthy mix of scholars in computer science and law, civil and human rights advocates, practitioners, and government policymakers.

In the United States, the last 8 years saw a flurry of lawsuits and government enforcement activity around the topic of ICT accessibility and many websites did see improved accessibility as a result. It is unclear what the future holds for U.S. government enforcement, but human rights instruments such as the CRPD, help point the way to a more inclusive world of technology. Ensuring that people with disabilities have equal access to information and communications technologies, is a fascinating topic, because many of the technical solutions already exist, but are not being implemented, and as described earlier in this blog post, are being actively resisted. Many technology developers and managers around the world still are not aware of the technical solutions, and are equally unaware of the laws, regulations, and human rights treaties requiring equal access. We hope that Disability, Human Rights, and Information Technology can help bring attention to this important topic, and help shed light on some of the interesting questions that still need further study.