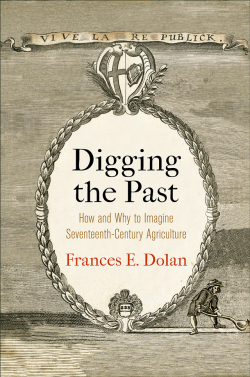 Today, we have a guest post from Frances E. Dolan, Distinguished Professor of English at the University of California, Davis and author of Digging the Past: How and Why to Imagine Seventeenth-Century Agriculture, new from Penn Press. Digging the Past explores how writers and thinkers in the seventeenth century grappled with the challenges and opportunities posed by the watershed of new practices that would ultimately lead toward the industrialization of agriculture (alongside robust and inventive experimentation that laid the groundwork for what we now think of as alternative agriculture). Dolan offers fine-grained case studies of projects heralded as innovations both in the seventeenth century and in our own time: composting and soil amendment, local food, natural wine, and hedgerows. Along the way, she illuminates how the seventeenth century continues to shape both material practices and popular ways of imagining and describing what farming should be and do. In today's post, Dolan reveals the story behind the image featured in her book's cover design, and she highlights how it resonates with the histories of writing and thought that she explores and the scholarly methods she deploys in Digging the Past.

One of the great pleasures of publishing with the University of Pennsylvania Press is the book cover designs. As I moved through the production process on my recent book, Digging the Past: How and Why to Imagine Seventeenth-Century Agriculture—a study of how the seventeenth century continues to shape both hands-on practice and popular anglophone ways of imagining and describing what farming should be and do—I eagerly collected possible images for the cover. When I first saw the cover John Hubbard designed for the book, I was taken aback by the way he had emptied out the busy title page I had sent as a cover possibility. I cherish every detail in the original image, which you can see here from the copy owned by my home institution, the University of California at Davis. As a consequence, I’ve realized, I approach this title page as a kind of visual archive, full of information I can’t let go. Hubbard approached the image differently, as a resource he could draw from selectively and imaginatively. Because that’s the relationship to the past my book advocates, I quickly fell in love with Hubbard’s design—particularly his confidence in using the original image without reproducing it exactly. I want to talk here about the title page of Walter Blith’s The English Improver Improved, the book it’s from, and what I learned from a designer’s bold recycling of found materials. 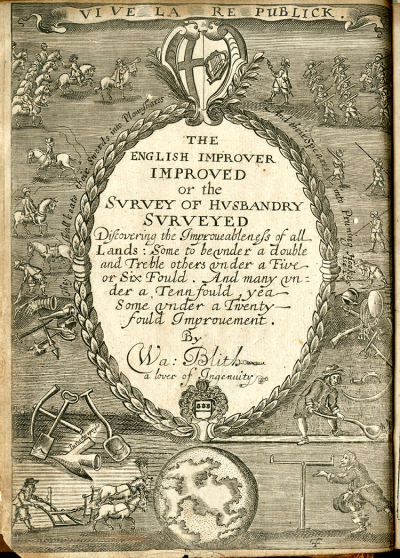 Hubbard’s transformation of this image strips away some kinds of evidence the original carries. The result is a sharper focus on what’s left. The bustling landscape of the original title page dissolves to leave the focus on one little digger, toiling away. So isolated, he figures one consequence of the changes in agricultural practice Walter Blith advocated as improvements: depopulation or driving farmers off of common lands and concentrating ownership and control in the hands of the few. He might be Blith’s intended reader, a farmer like himself who, motivated by ownership of his land, would make long-term investments in it. The little digger is, then, the husbandman and English improver, a figure for Blith himself.

The son of a cereal and dairy farmer, Blith farmed his own land and helped to oversee the contests over land that were a crucial part of the English civil wars in the mid-seventeenth century. He was a captain in the parliamentary army, and, according to Joan Thirsk’s profile in the Oxford Dictionary of National Biography, he sequestered royalist land during the civil war, collected rents, and “in 1649 and 1650 was surveyor of confiscated crown lands in four counties.” He himself bought confiscated crown land—that is, he extended his own holdings through the opportunity the war’s disruptions afforded.

Blith first published his agricultural advice in 1649 as The English Improver, Or a New Survey of Husbandry. He dedicated this book to “those of the High and Honorable Houses of Parliament,” and, lifting a metaphor directly from earlier English writers on agriculture, described husbandry as “the sinew or marrow holding together the joints of monarchy.” But the joints of monarchy did not hold together. That same year, parliament tried King Charles I for treason and tyranny and beheaded him. When Blith revised and expanded his work in 1652—almost doubling the length and adding this title page and woodcut illustrations–– as The English Improver Improved or the Survey of Husbandry Surveyed, he dedicated it to Oliver Cromwell and his council of state. In this expanded version, Blith silently made a telling change to the metaphor: “Good husbandry is as the sinews and marrow that hold together the joints of common good.” Commonwealths may replace monarchies, the body politic might change its shape, but husbandry remains fundamental.

The title page to this expanded edition reminds the reader that the country has been at war, showing us armed cavalry and foot soldiers. It insists that agriculture is crucial to healing the land and making peace, citing Isaiah 2.4: “They shall beate their Swords into Plowshares / And their Speares into Pruning Hookes.” Like this quotation from scripture, the banner at the top of the page “Vive La Re Publick” links husbandry to the common good and the commonwealth. Both sides will now need to turn their attention from battle fields to corn fields. It is this expanded edition on which I draw throughout my book because in it Blith elaborates on the initiatives that interest me including planting green manures, composting, and other forms of soil amendment, cultivating hedgerows, and eating and drinking “local.” Promoted as innovations then, they are once again prominent alternative or sustainable agriculture projects. On these topics, past and present can speak to one another.

What has been removed from the image on my book’s cover is much of the visual and verbal evidence of that very particular 1652 context. What’s left is a kind of clue, the banner trumpeting “Vive La Re Publick” and tying the industry of that one lone English improver to the commonwealth and the common good. This clue challenges the viewer to make that connection in the absence of other visual evidence. The open space invites speculation. In the original title page, the detail that arrests my eye as a specialist also roots it very much in one time and place. Depopulating the image makes it easier to unstick Blith in time, so that he can float and travel and entertain affiliations with ancient writers, non-English writers and practices, and our own moment. Loosening the tether to the seventeenth century, we release the lone digger to move across time and space in our imaginations. This movement is central to my book as I track figurations, such as feeding the hungry earth or seeing wine as the “blood of the grape,” across time and place. I do this in order to show how our imaginations and figural language are informed by the seventeenth century, whether we recognize it or not, and to argue that we approach the past as a resource—a kind of compost barrel––more than a straitjacket. Doing so requires letting go of some specifics in the interest of cultivating resonances and connections that serve our needs now.

Hubbard’s creative use of Blith’s 1652 title page not only provides a model for how I hope my readers will dig the past. It also resembles Blith’s own treatment of the ideas he learned from Classical writers and borrowed from his contemporaries. Blith assembled ideas and even passages from a wide range of sources. Like other seventeenth-century readers, he broke down what he read into pieces he reassembled into his own text. Hubbard’s creative use of an image, not as a blueprint but as a reservoir, which we can engage and reimagine and reinvent, is a distinctly seventeenth-century form of craft, what Blith might have called “perfect true workmanship.”