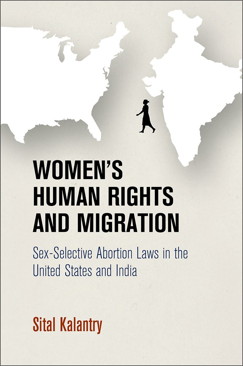 Today we have a guest post from Sital Kalantry, Clinical Professor of Law at Cornell Law School, Director of the International Human Rights Policy Advocacy Clinic, and author of Women’s Human Rights and Immigration: Sex-Selective Abortion Laws in the United States and India, out now from Penn Press. In her book, Kalantry focuses on immigrants of Asian descent living in the United States who are believed to abort female fetuses because they do not want a female child. While sex-selective abortion is a human rights concern in India, should we, for that reason, assume that the practice undermines women's equality in the United States? In exploring this question, Kalantry argues that traditional feminist legal theories and international human rights law fail to provide adequate guidance in examining the human rights implications of the reproductive practices of immigrant women. In this post, she builds upon this analysis by reacting to Justice Clarence Thomas's misconstrued citation of her own research in a recent Supreme Court decision.

Justice Thomas’s recent opinion in Box v. Indiana foreshadows the abortion fight that will be played out at the Supreme Court in the years to come. Justice Thomas’s twisted opinion cited my work out of context, as well as the work of other authors. By citing only my work on sex-selection in India and ignoring my work showing the false premise on which sex-selective bans in the United States are peddled, Justice Thomas proves one of the points in my book.

In Women’s Human Rights and Immigration, published in 2017, I reviewed the legislative history and text of state and national bills prohibiting sex-selective abortion. The justifications for those laws were replete with references to the high rate of sex-selective abortions in India and to narrow empirical research that was interpreted to demonstrate widespread sex-selection among Asian-Americans. In today’s transnational world, feminists must engage with the legal, political, and social contexts of other countries when it comes to regulating the behavior of immigrant women.

Justice Thomas’s opinion quoted an op-ed I wrote in The New York Times about the sex ratio crises in India caused by illegal abortions of female fetuses. Why is the situation in India even relevant to an opinion about the constitutionality of abortion in the United States? The anti-abortion movement makes continual reference to foreign countries to bolster the idea that people from those countries living in the United States are misogynist and abort fetuses if they learn that it will be a girl. They draw parallels on the social implications of this practice across countries without appropriately distinguishing the contexts. Justice Thomas expands the conversation beyond India and points to European countries to argue that permitting people to abort fetuses with Down Syndrome is problematic because it is now nearly eliminated in those countries. Why should the empirical realities of other countries influence our laws? They should not. We should focus on the situation in the United States yet still understand the practices in the contexts in which they emerge.

After making the case that sex-selective abortion is widespread in India and China, Justice Thomas turns to Asian-Americans in the United States. The trend to pass legislation to ban sex-selective abortion in states across the U.S. began with an article 2008 by Almond and Edlund that was misquoted by multiple sources to create the impression that there is widespread abortion of female fetuses among Asian-Americans. Justice Thomas also cites an article by Edlund and Sun that used more recent U.S. census data from 2010. The authors find that the new census now shows there is no sex-selection among Korean-Americans, but it the trend continues among foreign-born Chinese and Indians. Their proof of this is that after having two girl-children, the sex ratios (male to female) of children born to foreign Chinese and Indians living in the United States manifest a bias towards males.

However, the authors only tell us how the ratio of boys to girls is distorted among Chinese and Indian Americans, but don’t tell us the actually number of “missing” women they find. When you calculate the actual numbers their findings show that there are around 569 “missing” Chinese and Indian girls in the U.S. None of this may be related to abortion. Compare that to India where there are 50 million more men than women. Pre-implantation sex selection through in vitro fertilization is legal in the United States. That, rather than abortion, could explain some of the small disparity in the sex ratio.

Different data analyzed from another perspective tells another story, though. When my co-authors and I examined another, separate data set (from 2008-2012)—a yearly survey conducted by the Census Bureau, the American Community Survey—we found that when you look at all the children born to Asian-Americans, they have more girls than boys. Moreover, when they have two prior boy-children they are also more likely to have a female child as their third child. But again, this is a small number of people. Should abortion policy in the U.S. be driven by the family balancing behavior of a small number of people? Sex-selection is problematic in India because of the context in which it occurs such as institutional concerns (e.g., it is harder for women to get employment than men) and sexist practices (e.g., dowry). Emerging empirical data suggests that violence against women could be linked to the decreasing number of women due to sex selection.

The recent Supreme Court decision was not only about sex-selective abortion, but also race-selective and disability-selective abortion bans. The legislative debates around Arizona’s race-selective abortion ban claimed that was necessary to stop abortion providers from targeting African-American and Latina women. They claimed that the disproportionate levels of abortion among those minority communities occurs because abortion providers encourage them to have abortions. Yet the actual statute does nothing to address the alleged behavior of those providers; it simply criminalizes the behavior of African-American and other minority women by accusing them of aborting their fetuses because they are discriminating against them.

For the moment, Justice Thomas agreed with his liberal colleagues to punt the question about the constitutionality of “reason-based” bans to a different day, but he is right to say that the Court can’t avoid it forever. Recently, a federal judge granted a temporary injunction against Kentucky’s reason-based bans. That case will likely be appealed to an appeals court and could create the circuit-split that would make it more likely for the Court to take on the issue. Bans on specific reasons for abortion will appeal to members of the Court that do not want to drive a truck through Roe v. Wade, but are willing to kill it with a thousand cuts.