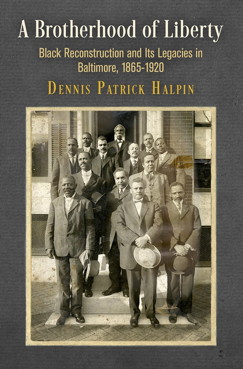 Today, we have a guest post from Dennis Patrick Halpin, who teaches history at Virginia Tech and is author of A Brotherhood of Liberty Black Reconstruction and Its Legacies in Baltimore, 1865-1920. In A Brotherhood of Liberty, Halpin shifts the focus of the black freedom struggle from the Deep South to argue that Baltimore is key to understanding the trajectory of civil rights in the late nineteenth and early twentieth centuries. In the 1870s and early 1880s, a dynamic group of black political leaders migrated to Baltimore from rural Virginia and Maryland, where they pushed their newly adopted city to fulfill Reconstruction's promise of racial equality. In today's post, Halpin offers an overview of this crucial history and its importance for the decades and centuries that would follow.

In its October 13, 1866 issue, the Christian Recorder—a Philadelphia-based black newspaper—observed that, “It is now, as it was during the war-the Border States are a hindrance. Maryland ought to set the example for her sister States further South. South Carolina, is, today, ahead of Maryland, as she has repealed her black laws; but Maryland has not yet done so.” Written approximately a year and a half into the United States’ post-war Reconstruction, the article made an important observation all too often overlooked in our historical memory of the period: the fraught nature of the Reconstruction Era in former slave states that did not secede. While histories of the period remain some of the most contested terrains in United States history, most studies examine the states of the former Confederacy. This focus, however, excludes the experiences of African Americans in the slave states on the border between North and South. The story of Reconstruction Era Maryland both complicates the nationwide story of the period but also helps us understand how black Marylanders emerged from these experiences at the forefront in the fight for racial equality.

Maryland did not follow the path of states further south during the Reconstruction Era. Initially, Maryland jumped out to a promising start as state lawmakers made tangible moves to improve conditions for African Americans prior to the war’s conclusion. In 1864, the state’s Union Party, a fragile coalition united in their opposition to secession, rewrote the state constitution to free Maryland’s slaves. They also passed a “registry law” that disfranchised a large number of Confederates. With these moves Maryland’s legislators had seemingly laid the foundation for a meaningful state of equality. Not only had they abolished slavery but seemingly ensured that Confederates would not regain power to shape the state’s post-war Reconstruction.

The federal government’s efforts complimented Maryland’s initial steps towards racial equality. Because it did not secede from the Union, Maryland was not subject to the rules of federal Reconstruction. Nevertheless, the state was not left to figure out a path forward entirely on its own. The federal government opened a branch of the Freedmen’s Bureau in 1865. Under the aegis of the Bureau, agents assisted black Marylanders in labor disputes, helped some get out of prison, provided legal assistance, and played a role in establishing an education system for African Americans. Though the Freedmen’s Bureau’s record was far from unblemished in Maryland—nor its impact as wide as many might have hoped—it had helped many African Americans adjust to life in the post-Emancipation United States. Black Marylanders also benefited from legislation passed at the federal level. In particular, the Civil Rights Act of 1866 enabled African Americans to contest prejudicial laws by guaranteeing “full and equal benefit of all laws and proceedings for the security of person and property.” Black Marylanders now had a powerful tool at their disposal as they shaped the meaning of freedom after slavery.

Maryland’s promising start ultimately proved fleeting. By 1866, Maryland’s Democrats rallied to regain power. The state’s governor, Unionist Thomas Swann, struck a deal with Democrats to overturn the registry law, enabling ex-Confederates to vote. White Marylanders joined their counterparts in the Border States of Delaware and Kentucky in bucking the nationwide trend of electing Republicans. The next year, the newly-minted Democratic majority wrote a new version of the state’s constitution that did little for black Marylanders beyond allowing them to bear witness against whites in court. The new constitution notably did not extend the franchise to black voters but it did shift the power to the state’s southern (and more conservative) counties by counting the entire population, including disfranchised African Americans, to establish representation in the General Assembly. In 1868, the Freedmen’s Bureau ceased operations in Maryland. Local resistance and intransigence effectively ended anything resembling Reconstruction in Maryland.

At the height of Radical Reconstruction—a period when black men were elected to public office and exercised their franchise throughout the South—Maryland’s Democratic Party effectively shut out African Americans from the political process. White Maryland politicians joined their Border State counterparts in Delaware and Kentucky in refusing to ratify the Fourteenth and Fifteenth Amendments. The first black Marylander to cast a vote following Emancipation did not do so until 1870 after the United States adopted the Fifteenth Amendment. These circumstances forced black Marylanders to improvise.

Black Marylanders shaped the contours of their freedom in numerous ways despite the political obstacles they encountered. Building on a tradition of using the courts that reached back to the antebellum era, activists engaged in acts of civil disobedience—and then filed lawsuits—to protest segregation on public transportation. Others founded a shipyard cooperative to help employ black dockworkers that lost their jobs after white workers forced them from the jobsite. Some, like Isaac Myers, sought to organize workers into Unions. Black Marylanders also helped found independent political organizations, like the Colored Border States Convention, to pressure the federal government to intercede on their behalf. Finally, numerous black Marylanders participated in building an education system for black children.

Black Marylanders’ experiences during the Reconstruction Era helped establish a tradition of independent reform. During the 1880s this tradition would be transformed by Harvey Johnson and the men and women who joined him in forming the Mutual United Brotherhood of Liberty, one of the first post-Emancipation civil rights organizations in the country. The Brotherhood’s use of protest and test-case litigation established a model that other civil rights organizations would build upon in the coming decades.