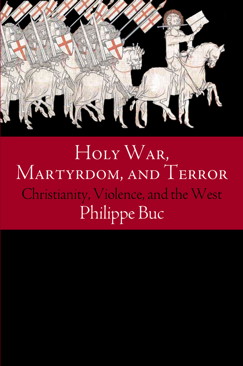 Today's Q&A is with Philippe Buc, author of Holy War, Martyrdom, and Terror: Christianity, Violence, and the West, which examines the ways that Christian theology has shaped centuries of conflict from the Jewish-Roman War of late antiquity through the First Crusade, the French Revolution, and up to the Iraq War. Buc connects the ancient past to the troubled present, showing how religious ideals of sacrifice and purification made violence meaningful throughout history.

Penn Press: How would you characterize the American ideology of war? What are its principal traits?

Philippe Buc: An at first sight strange presumption that American wars are about “liberty” and concern “the world,” even when limited in ambit; the frequent but not obligatory sense that somehow war can purify the nation; the contradiction between the idea that American wars are gentler than those waged by others, yet the willingness to fight them very hard, given that these are wars with universal meaning; and (in connection to this) the sense that this could be the war to end all wars.

How does this relate to the history of European violence?

The presumption is strange only if one does not realize that in the not so distant past European nations and political groups have very much imagined the same about their own wars—that they purify or regenerate, that they have universal meaning, that they have something to do with “freedom,” and that they are embedded in a forward march of history leading to eternal peace.

How did theology shape premodern Western understanding of violence?

It did so in so many ways that a one-paragraph summary is impossible. What should be underlined is that theology has also shaped modern Western understandings, thus that there are important conceptual similarities between premodern wars and modern wars. Yet in a nutshell, the theological idea that the wars of the Old Testament symbolize spiritual wars against vices, demons, and deviants (heretics, Jews, pagans, and false brethren) has enabled the projection of the highly positive value attached to what is spiritual onto actual material wars against deviants, both outsiders and insiders (the “traitors”). It also means that there is a correlation between external war and purification of one’s own group.

What are some examples of this?

The frequent correlation in the crusade era and in the era of the Wars of Religion between internal reform (rectification of the Church, Christian society, and individual souls) and external crusade.

To what extent is religious or ideological violence attributed to madness? What do you think are the merits and weaknesses of such arguments?

One should evidently wonder why a given individual, given an ideology or religion, did turn to violence, as opposed to why a given individual abstains from violence. This has something to do with psychological profile, human networks, and so on. But to dismiss the explanations for violence that agents themselves give, as if they had no brain, is highly simplistic.

What alternative explanations would you offer?

Religion and ideologies also have a mobilizing force, and explain how so-called fanatics kill and how they kill. There is a long tradition in the West of dismissing the violent enemy as mad or possessed, and it masks these motivations and their force.

Perhaps the premodern understanding was more oriented to the otherworld, but that is really an issue of degree, since premodern martyrdom could involve a project for the here and now. Certainly a constant is that martyrdom moves History forward, so is causative of great transformations.

How are State violence and terrorist violence related to each other?

Both aim at creating or maintaining a wished-for order, a pure society. The State evidently understands its violence as useful for the whole (and further, if this state sees itself as having a universal mission, that violence is useful for humankind at large). Small-group terrorist violence also aims at something larger than the group itself.

Why is the relationship between coercion and liberty paradoxical?

Is it not paradoxical to think that one can coerce other human beings into liberty (and that this liberty is understood as bondage to a higher ideal)?

How much agency did premodern Christians view themselves as having in acts of religious violence? How does this relate to modern American views of large-scale violence?

God as the Lord of History was the person Who acted. Exceptionally, He could grant humans the grace of seemingly doing His work. Strikingly, this is very visible in the case of mission or holy war. As many have pointed out before me, with Modernity, a personalized History replaces God. One acts in the name of the Future. Modern groups have tended to see themselves as doing the work of History; here as well America is not an exception within Western cultures.

Philippe Buc taught at Stanford University for two decades and is now Professor of Medieval History at the University of Vienna. He is author of several books, including The Dangers of Ritual: Between Early Medieval Texts and Social Scientific Theory. Holy War, Martyrdom, and Terror: Christianity, Violence, and the West is available now.