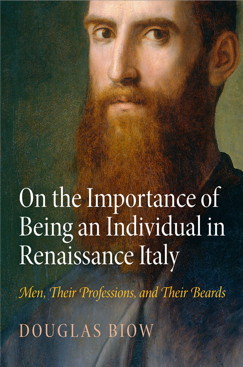 Today sees the return of the Penn Press Author Q&A, with Douglas Biow, whose book, On the Importance of Being an Individual in Renaissance Italy, explores the individual in light of early modern Italy's new patronage systems, educational programs, and work opportunities in the context of an increased investment in professionalization, the changing status of artisans and artists, and shifting attitudes about the ideology of work, fashion, and etiquette.

Penn Press: Why has “the individual” faded from view in Renaissance studies?

Douglas Biow: There are many reasons for it, but let me try to suggest a few, at the risk of grossly oversimplifying the matter. The first has to do with an entirely justified debunking of Jacob Burckhardt’s famous, and for a long time influential, claim that the bright, shining light of the “individual” emerged in the Italian Renaissance out of the dark, slumbering, “corporate” structure of identity that marked the Middle Ages. As historians have now conclusively demonstrated, we simply know that was not the case: there was as great an emphasis on corporate identities in the Renaissance as there was in the Middle Ages, and there was nothing dark or slumbering or dormant about the Middle Ages, which was an exceptionally vibrant and innovative period in European history. Simply put, the Renaissance was very much a period invested in what goes by the name of “corporatism.”

Nevertheless, this important recognition has led scholars to consistently overemphasize the centrality of corporatism wherever one might even begin to detect the presence of the individual at play in the Italian Renaissance, much less the European Renaissance more broadly, so much so that the notion of the individual, in my judgment, simply gets eclipsed. Another reason has to do with the rather pervasive application to the Renaissance, on the part of various scholars, of critical theories that undermine or completely dismantle the notion that the individual exists at all, not just now but also, to be sure, in the past. So there has been a predisposition to begin with the assumption that to look for the individual, or expressions of notions of individuality, in the Renaissance was to engage in a scholarly project that was at best somewhat botched from the start or at worst done in bad faith.

Finally, yet another reason has to do with the fact that social historians, while not denying the existence of the individual or individual agency in the past, have been so invested in looking at large-scale structural patterns over broad spans of time that the individual has simply not been a matter of concern to them. I find this to be true, curiously enough, even with regard to the work of micro-historians, who focus on individuals in local cultures, often enough peculiar, atypical individuals; yet they do so not to investigate the concept of the individual but to describe large-scale intellectual, social, and legal trends that macro-historians tend not to be able to capture in their studies or simply have no particular interest in examining.

What are the consequences of not viewing the individual as an integral part of Italian Renaissance history?

I’d begin by asking even more broadly what are the consequences of not viewing the individual as an integral part of history both before and after the Italian Renaissance? But specifically with regard to the Italian Renaissance, I would say that not viewing the individual as an integral part of its history deprives us of recognizing how something new and interesting and dynamic was afoot in the period, something that helps us appreciate not just the staggering achievements of, say, Michelangelo but also the less-known, but still in their own way noteworthy, achievements of a variety of people in the period, including, for instance, the rather bizarre, maverick, and fascinating surgeon-physician Leonardo Fioravanti. I believe it also helps us see that the notion of the individual certainly precedes the Renaissance and that much more needs to be done to understand how it changed over time. Beyond that, I suppose that attending to the notion of the individual has allowed me to have some access to the texture of life of the past in an effort to understand what I would broadly call a history of representations of states of minds.

Can you explain the meaning of nescio quid?

In the context of my book I use the phrase, which was also used in the period and means “an I don’t know what,” to characterize a number of ways in which some men recognized that a certain mystery lay at the heart of what made them distinctly and, yes, essentially themselves even as they acknowledged all the ways in which they were very much like others and bound to others through various kinds of corporate identities.

In what ways did people during the Italian Renaissance claim or demonstrate their individuality?

Well, that’s what has been fun about this project. Once you start looking closely at the Italian Renaissance you see all the ways in which people were embedded in communities and collective identities, but you also then see all the ways in which they inversely claimed or demonstrated their individuality. And there was a wide range to the ways in which they accomplished this. In one sense, they did so by distinguishing themselves professionally, as men of incomparable wonder in their ability to achieve things that no one else could do, even as they sometimes quite openly lay bare the very mechanisms by which one should rationally be able to do those things—in a sense flaunting their exceptionality. Or they present themselves as mavericks, aggressively addressing the world with a signature style. Or, for that matter, they played with widespread fashions in an effort to align themselves with others yet still selectively mark themselves as unique.

What motivated these practices?

By and large I would say it was driven by a yearning for distinction and status and recognition (as well as self-recognition) that manifested itself in a number of cultural practices, from being a courtier to being an artisan to being a peripatetic surgeon.

What social groups participated in this deliberate cultivation of identity?

From what I can tell, a broad range of social groups, including, I should stress, women, even if my focus has been on men in this book. That said, the materials I worked with are drawn from the male elite or those aspiring to be recognized by, or be a part of, the male elite.

Can you give us examples of prominent Renaissance figures who “performed” their identities? In what ways did they set themselves apart as individuals?

One of my favorite examples is Benvenuto Cellini—certainly not a prominent person in his own right, although Cellini would have unquestionably claimed otherwise in his autobiography. In his treatises on sculpting and goldsmithing, for instance, Cellini makes evident how he is embedded in and speaking for a profession with a venerable tradition. In so many ways this is a man with a strong sense of corporate identity. At the same time, he relentlessly calls attention to himself in those treatises, and in the process he distinguishes himself as someone who is not only worthy of being imitated but also in his own special way inimitable. As a result, we are expected and conditioned to respond to everything he does with “meraviglia,” understood as both admiration for and wonder at his unique achievements.

You devote a considerable portion of your book to beards. What was the importance of facial hair to Renaissance elites?

For the most part, wearing a beard, as I see it, cemented alliances (much as adhering to a fashion often does) and it distinguished men collectively as men in the period, but it also allowed elite males to fashion their identities, dissimulate, simulate, and assert their own individuality. There were also, however, fascinating limits to what men could do with facial design in the absence of advanced cosmetic surgery practices. For the record, I only grew a beard after the book came out in print, to see what it would be like. Not sure it will last through a heat-wave on an Austin summer.

In your opinion, who had the most impressive beards during the Renaissance?

Pietro Aretino, who always presented himself as bigger than life in his writings, certainly has an impressive beard that matches his equally impressive girth. But I suppose my favorites in the Italian Renaissance are the stylish, and sometimes extravagantly weird, beards of Galeazzo Sanvitale, Bartolomeo Panciatichi, and Giovanni della Casa, although, truth be told, my preferences may simply have to do with the fact that I very much like the way the artists visually played with the central motifs of the beards in their overall pictorial compositions.

How have attitudes toward the position and importance of the individual changed since the end of the Italian Renaissance?

Even if you want to give up individual rights today in twenty-first-century America you simply cannot do so because those rights are by definition “inalienable”: they are baked into the cake of what it means to be, legally speaking, an individual. As far as I can see, that concept, which lies at least in principle at the foundation of our economy and society, would have simply been foreign to anyone in the Italian Renaissance, although there is a complicated legal history to the notion of the individual from the classical period through the Middle Ages to the Renaissance. In any event, that’s one of many differences I would immediately point to. Another way of thinking about the issue is that there was a concept of the individual in the period, but not the modern, post-Enlightenment one of “individualism.”

Douglas Biow is Superior Oil Company-Linward Shivers Centennial Professor of Medieval and Renaissance Studies at the University of Texas at Austin, as well as the Director of its Center for European Studies. He is the author of In Your Face: Professional Improprieties and the Art of Being Conspicuous in Sixteenth-Century Italy; Doctors, Ambassadors, Secretaries: Humanism and Professions in Renaissance Italy; and The Culture of Cleanliness in Renaissance Italy, among other books. On the Importance of Being an Individual in Renaissance Italy is available now.