In this post, Penn Press author Elise Lemire describes a community's efforts to bring its history of slavery to light.

A Small Bench by the Side of the Road

Concord, Massachusetts, is a town chock full of memorials, monuments, and museums. Visitors arrive by the busload to see the bridge where the “shot heard ‘round the world” was fired. Mothers take their daughters on pilgrimage to the house where Louisa May Alcott wrote and set Little Women. And Thoreauvians leave stones at the cairn near the cabin site where the founder of environmentalism lived for two years on the shores of Walden Pond.

In the summer of 2008, I was trying to finish a book on the history of slavery in this most storied of towns. There was just one nagging question left: how should Concordians acknowledge that the home of the Minute Men and Ralph Waldo Emerson was also a slave town for 150 years? I wanted the epilogue to my book, Black Walden: Slavery and Its Aftermath in Concord, Massachusetts, to offer a concrete suggestion. But what kind of monument could hold a candle to the iconographic Minute Man Statue or any other of Concord’s many awe inspiring landmarks?

That July, I read an article in the New York Times about a bench that had just been installed by the Toni Morrison Society on Sullivan’s Island in South Carolina, where some 40 percent of the slaves brought from Africa arrived in North America. The idea for such a bench had been hatched by Morrison in a 1989 interview on Beloved, when she observed that there are no American memorials to the nation’s enslaved people:

There is no place you or I can go to think about or not think about, to summon the presences of, or recollect the absences of slaves….There is no suitable memorial, or plaque, or wreath, or wall, or park, or skyscraper lobby. There’s no 300-foot tower, there’s no small bench by the side of the road.

The Toni Morrison Society recognized the aptness of memorializing the enslaved with a small bench. There is a kind of poetic irony in offering a mundane piece of furniture as a prompt to recall something as terrible and vast as slavery, of installing a place to sit and remember those who were never allowed to rest. The Society pledged to install more benches at those sites where it seemed particularly imperative to “summon the presences” of America’s enslaved.

I immediately decided to suggest in my epilogue that Concord should apply to the Society for a bench. Of all the places in the United States where it is important to wrestle with the contradiction of slaveholders founding a nation dedicated to liberty, Concord is most certainly one.

Last month, the nation’s fifth slavery bench was installed by the Toni Morrison Society in Concord at the request of a new organization dedicated to making the town’s slavery history visible. The Drinking Gourd Project applied for the bench and also organized the purchase and relocation of a house built by a former Concord slave. Now situated across the street from the Old North Bridge on land managed by the National Parks Service, the Caesar Robbins house will serve as an interpretive center. In the future, when school children and tourists come to see the nation’s birthplace and the monuments to freedom that dot the Concord battlefield, they will also have an opportunity to learn about Northern slavery and to pay homage to our country’s enslaved ancestors.

In Concord, it’s taken over two hundred years to remember the men, women, and children who were enslaved there.  But as Toni Morrison declared when she sat on the first bench, “It’s never too late to honor the dead.” 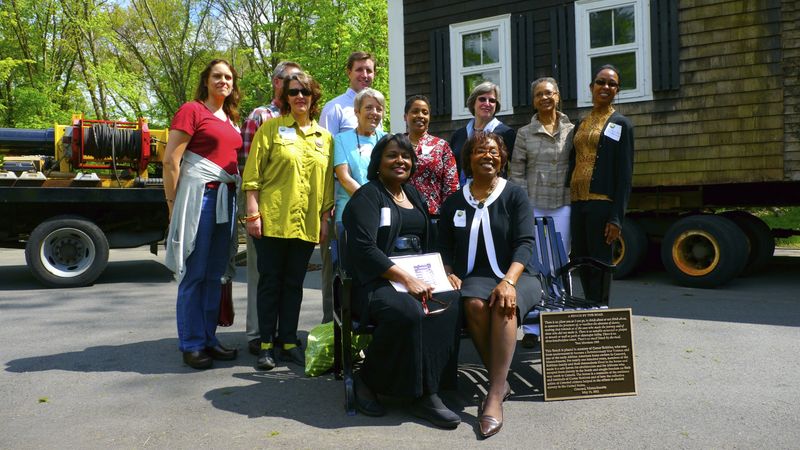 Members of the Drinking Gourd Project and officers from the Toni Morrison Society at the dedication of Concord’s Bench by the Side of the Road.  Photo courtesy of Tom Hersey.

Elise Lemire is Doris and Carl Kempner Distinguished Professor of Literature at Purchase College, SUNY. She is also the author of "Miscegenation": Making Race in America.