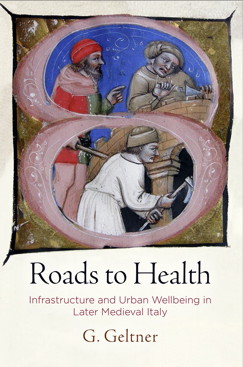 Today, we have a guest post from G. Geltner, Professor of History at the University of Amsterdam and author of Roads to Health: Infrastructure and Urban Wellbeing in Later Medieval Italy, new from Penn Press. Geltner's book provides a critical overview of the mandates and activities of the viarii and camparii as enforcers of preventive health and safety policies between roughly 1250 and 1500, and offers three extended case studies, for Lucca, Bologna, and the smaller Piedmont town of Pinerolo. Here, he draws upon his knowledge of disease in the middle ages to reframe the ongoing COVID-19 pandemic and society's reaction to it.

The past few weeks have seen a shift in the analogies drawn between the spread of COVID-19 and earlier health crises. In particular, the Black Death (1346-1353), a plague pandemic that killed over one third of Europe’s population, but which allegedly also spawned new preventative health measures, including strictly enforced quarantine and mass social isolation. As COVID-19 anchored itself in a woefully unprepared and complacent Euro-America, approaches seen as medieval just weeks ago reemerged as scientific, legitimate and responsible interventions. That was a remarkable turnaround. Around January, foreign observers of China and Iran, for instance, compared local conditions to the onset of plague and derided local governments’ slow and authoritarian responses as a return to “the Middle Ages.” That tune soon changed as the scale of COVID-19’s infectiousness became evident, ironically beginning with Italy, the cradle of modern public health.

Over the last few days, governments imposing unprecedented peace-time restrictions, including tracking infected people’s phones, stressed the inevitability of pandemics. Disease crises stopped being construed as a foreign medieval reality borne out of hygienic ignorance and incompetence; they were part of the human condition and its fragile political order. And if nothing that is unique to the modern way of life can prevent this kind of mass death, the medieval might as well occupy space in the present. Yesterday’s Draconian law became today’s aggressive measure. Quarantine, now carefully distinguished from social isolation, lost its pejorative undertones. Unity and conformity, not innovation and economic viability, became the paramount concern in the war on COVID-19, even among free-marketeers such as Emmanuel Macron of France and Mark Rutte of the Netherlands. Donald Trump proudly described comprehensive travel bans and the widest quarantine measures in modern American history as a rational way to put America First.

The silent embracing of medieval—or, to be precise, non-biomedical—preventative health measures reflects an appreciation of low-tech interventions beyond a small group of historically conscious public health professionals. It is also an important admission of the power of history to educate and identify new solutions. For millennia, healthcare in Europe and the Middle East was a preventative pursuit, mostly requiring basic education in Hippocratic and Galenic medicine, clear communication and the efficient policing of infrastructures. Swapping vaccines and ICUs for curfews and quarantines may strike many today as insufficient under the juggernaut of global trade and transportation. The world is also far more urbanized in 2020 than in 1348, and pandemics are, simply put, anti-urban. Yet responses to COVID-19 clearly came too late to effectively contain it, the WHO’s current goal being to slow down infection rates and gradually build herd immunity. For most people, and for many months to come, that means following the tried and tested technique of avoiding people, places, and old habits.

To state the obvious, “medieval” solutions have their limits. Biologists, chemists, and medical professionals are rushing to develop vaccines, which should enable us to return to life as we remember it. Central banks and insurers are scrambling to offer financial safety nets so we can go back to consuming what we were used to. And in obvious ways our social stability relies upon digital technologies and infrastructures barely conceivable even fifty years ago. That immediate past, that desired normalcy, is something current plans promise to restore. Yet to do so we may have to get a little medieval. Alternatively, we can stop using simplistic labels and look at history as a treasure trove to think outside the confines of the present, and resist what seems inevitable.