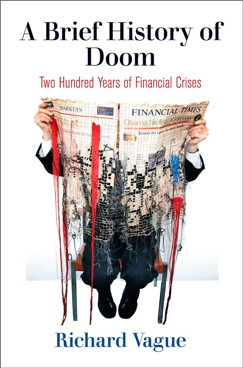 Today we have a guest post form Richard Vague, a managing partner of Gabriel Investments, Chairman of The Governor’s Woods Foundation, and author of 2014’s The Next Economic Disaster: Why It’s Coming and How to Avoid It and of the exciting new book A Brief History of Doom, which chronicles two hundred years of financial crises across the world to discern patterns and lessons that can guide future decisions and policies. Here, he shares praise the book has received and a selection of relevant excerpts.

A Brief History of Doom is a history of financial crises over the last 200 years: the Great Recession, the Great Depression, and a number of other crisis including Britain in 1825, Germany in 1873, the U.S. in 1989, Japan in 1998 and many more. The economist Steven Keen noted, “A Brief History of Doom is the authoritative historical reference on why financial crises occur, with stunning detail on the six biggest crises in the history of capitalism. It is beautifully written, and manages to combine a strong unifying theme of the role of excessive private debt booms and credit busts with engaging historical detail.”

Cornell professor Matthew Barron wrote, “Richard Vague has written a fascinating book on the history of banking crises. The book makes a compelling case that the common element across all severe banking crises in advanced economies throughout history is the run-up in private debt, especially excessive bank lending to real estate. … Even as an expert on the history of banking crises, I learned a lot reading all these new and magnificent gems of rich historical detail that Richard has uncovered.

The following excerpts from the book provide insight:

“Many remember the 1980s as a renaissance in the United States. Newly elected president Ronald Reagan and Federal Reserve chair Paul Volcker were credited with defeating the inflation of the 1970s. … Yet those memories belie stark realities of calamities and crises. The decade of the 1980s was one of the most economically turbulent and crisis laden in American history. Indeed, it was perhaps the most chaotic in terms of the number of sectors adversely affected. The results of the period led to more than two thousand bank failures, more than eight hundred savings-and-loan failures, the junk-bond crisis, the commercial real estate crisis, the Latin American debt crisis, and an energy-lending crisis triggered by an oil price collapse. There was even an agricultural lending crisis early in the decade. In each one of these, it was a rapid buildup in private debt that brought the overcapacity and crisis. This decade saw the largest wave of bank failures since the 1930s. And it saw the largest percentage one-day stock market drop in U.S. history, on October 19, 1987, a collapse parried only when the Federal Reserve flooded the market with unprecedented levels of liquidity. …

The most dramatic failure of the S&L debacle would come … with Charles Keating’s notorious Lincoln Federal Savings and Loan, though hundreds of failures occurred even after this point. Lincoln was seized in April 1989 and cost the government over $3 billion, while leaving about 23,000 customers with worthless Lincoln Federal bonds. Keating had once urged his staff to ‘remember the weak, meek and ignorant are always good targets.’ Once he took over Lincoln in 1984, Keating jettisoned existing, conservative management and grew Lincoln from $1.1 billion to $5.5 billion in five short years by lending and by buying land, buying equity in commercial real estate development projects, and buying Drexel-sponsored junk bonds.

Keating, like others in this era, made risky investments and used Lincoln as a personal piggybank. Lincoln exceeded its statutory limits in direct investment—limits that were designed to cap risk—by $600 million, but chafed when the [industry regulator] FHLBB began to investigate this and other practices. He enlisted the help of five U.S. senators—Donald Riegle (D-MI), Dennis DeCon-cini (D-AZ), Alan Cranston (D-CA), John Glenn (D-OH), and John McCain (R-AZ)—along with Speaker of the House Jim Wright (D-TX) to protect him from the FHLBB in 1987. Keating also hired Alan Greenspan as a lobbyist ‘to help recruit the Keating Five.'”

“[To satisfy their voracious need for capital], clever railroad executives devised a financing method known as the railroad farm mortgage. The La Crosse & Milwaukee Railroad owners invented this deceptively simple scheme. They would approach farmers with land near the planned rail line and entice them to purchase shares of the railroad’s stock with debt secured by a mortgage on their farms.

For the farmer the deal seemed like a no-lose proposition. It required not a dime in downpayment and no documentation other than an appraisal by a railroad agent. It foreshadowed the no-down-payment subprime loans of the Great Recession. Dividends on the railroad’s stock the farmers bought covered the interest on the loan. The farmer could expect increased land values once the railroad was built and an appreciation in the value of his railroad shares as the company accelerated its operations. But railroads that marketed these schemes were not profitable, and the dividends they paid were unsustainable. It was a catastrophe waiting to happen. …

The La Crosse & Milwaukee and Milwaukee & Mississippi Railroads failed later in the summer, the effects reverberating through the financial networks, starting with New York banks that had invested in them. The impact then expanded outward until it reached those unfortunate Wisconsin farmers who had taken out loans collateralized by their farms to buy La Crosse stock at the urging of its agents, and now suddenly found themselves with neither a farm, because it would now be repossessed by the lender, nor railroad stock, since it was worth no more than a few pennies on the dollar.”

On the Great Depression:

“The Great Depression brought a level of misery rarely seen in American history … [and] was a massive residential and commercial real estate crisis. The financial records of the 1920s, which have largely been overlooked, indelibly show this. During the 1920s, annual housing and commercial real estate construction almost tripled—and nearly all of it was financed by debt.

This explosion in residential and commercial construction lending, aug-mented by lending for utilities and stock purchases, created the euphoria of the Roaring Twenties, the jazz age of robust spending and celebration. Com-panies used the new money from loans to expand and employ more people.

The acceleration in construction resulted in such extensive overbuilding that by the final years of the decade, before the stock market crash, thousands of newly erected office buildings, houses, and apartments sat empty. Office vacancy rates rose, and residential mortgage foreclosures nearly doubled in the final years of the decade. As in other cases, this crisis was inevitable be-fore it was obvious. The only question, and the only area where the president and the Federal Reserve could still have a discretionary impact, was the length and severity of that correction.”

A Brief History of Doom will give readers a perspective and understanding of financial crisis indispensible to understanding our turbulent global economic climate.