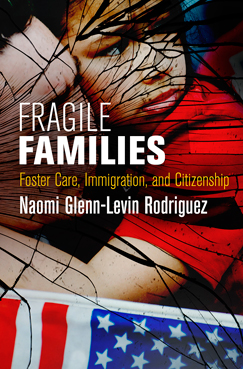 Today we have a guest post from Naomi Glenn-Levin Rodriguez, who teaches anthropology at Hobart and William Smith Colleges and is the author of Fragile Families: Foster Care, Immigration, and Citizenship. Based on research conducted in the San Diego-Tijuana region between 2008 and 2012, Fragile Families tells the stories of children, parents, social workers, and legal actors enmeshed in the child welfare system, and sheds light on the particular challenges faced by the children of detained and deported non-U.S. citizen parents who are simultaneously caught up in the immigration system in this border region. Here, Rodriguez reflects on changes in immigration policy in recent years, and the insights her research offers into these changes’ impact on undocumented families.

I conducted the research for Fragile Families: Foster Care, Immigration, and Citizenship during Barack Obama’s presidency. It was a complicated time, both disappointing and hopeful for immigration advocates and undocumented families, a period marked by the continued action of the “Dreamers,” a record number of deportations and the rising phenomena of separated families, and the profoundly impactful implementation of the DACA program.

The plight of families separated by immigration law, and the problems caused by an immigration enforcement regime that seemed ill-equipped to consider family and children’s rights, led to the separation of undocumented parents and their U.S. citizen children. This was done in a manner that many saw as counterproductive to immigration enforcement goals and hugely costly to the state for those children who entered foster care as a result of their parents’ detention and deportation. Many of these parents were not the “serious criminals” the Obama administration continued to insist they were prioritizing. Rather, they were often pulled into the immigration and child welfare systems following minor traffic violations or for leaving their young children at home while they worked to support them.

Importantly, however, policies fell short of what immigration advocates saw as a humane response to the realities of global labor needs and the conditions of poverty and instability that led to the ongoing displacement of thousands of individuals around the globe. The continued unrest and violence in Central America that contributed to what was characterized in 2014 as a surge in unaccompanied minors crossing the U.S.’s southern borders served as an example of a U.S. response that focused on containing and reducing the number of refugees entering the U.S., rather than addressing the issues that gave rise to the movement of youth towards the north. Virtually absent from the discussion was the U.S.’s own role in deporting young men who brought gang, drug, and gun violence from Los Angeles back to Central America.

However, at the same time the discourse that circulated was in many ways in contradiction with the actual policy measures. This discourse about immigration heralded a social justice orientation. It created the space to reframe undocumented immigrants as hardworking individuals who cared about their families and were upstanding citizens, and reimagined undocumented youth, particularly the Dreamers, as an important part of the future of the U.S., embodying the American dream of hard work, school success, and future contributions to U.S. society. Public protest of undocumented community members positioning themselves as “undocumented and unafraid,” and youth staging sit-ins in senators’ offices in support of the Dream Act legislation signaled a shift in undocumented immigrants’ abilities to claim a right to publicly protest the political realities that shaped their lives and limited their futures. The needs of at least the undocumented youth and U.S. citizen children of undocumented U.S. resident parents seemed to be within the realm of possible goals to move towards in making changes to immigration policy on a national scale.

Two years later, while I was in the final stages of preparing Fragile Families for publication, Donald Trump’s campaign rhetoric of Mexicans as “rapists” and “bad people” was circulating widely. And the publication of Fragile Families has coincided with the Trump administration’s new approach to deportation as a sweeping set of policies that aims to treat all undocumented U.S. residents as criminals without differentiation. Although it is too early to comprehend the impact of this change in policy, which thus far includes rising numbers of border enforcement agents and attempts to close down borders in new ways, it is not a leap to envision that these changes will likely result in increased numbers of separated families and an increased presence of U.S. citizen children in foster care. Most importantly, Trump’s rhetoric has continued to unleash and to validate a white nationalist worldview that sees immigration as a dangerous, criminal threat to the nation – a position which is not in any sense new, but which has been given a public forum that has been unprecedented for decades.

As media coverage has highlighted, the early months of Trump’s presidency have already seen key policy shifts. Undocumented parents and relatives who were previously comparatively safe in providing homes for unaccompanied minors while they awaited processing within the immigration system are now being systematically deported, and in some cases charged with human smuggling. An expansion of ICE authority to deport any undocumented individual has converted the previously safe spaces of churches and courtrooms into places of potential, and increasingly likely, apprehension. All of these changes undermine the efforts of law enforcement officers and child welfare authorities to do their important work of responding to real threats of violence and keeping communities safe.

Fragile Families is a call to consider the human consequences of policies that see children as cases, and undocumented parents and families primarily as criminals, and to build policies based in the extensive research that demonstrates unequivocally that children are better served by being reunited with parents, regardless of nationality, in cases where there is no evidence of serious abuse or neglect. It highlights needs across the board for more time and resources for child welfare services staff, and the need to empower them to do what is best for particular children and families, rather than having to bend to the whims of the current political discourse. It calls attention to the need for such staff to be relieved from ever-increasing budget constraints, anti-immigrant sentiment, and policies which inadvertently reframe detained parents as parents who have abandoned their children, and undocumented or deported parents as abusive, uncaring, irresponsible, or simply absent. In this political moment, we seem to be hurtling rapidly in the wrong direction.